The county under 16s travelled to Clann NaGael to play Donegal in the Ulster shield championship final at noon on Sunday. The weather conditions were benign as the half got under way. Tyrone took a very early lead when Kira Donnelly fired over a point from the 45 metre mark as the red hands had all the possession early on. Niamh Forker extended the lead with her first point. Donegal applied some pressure however Aine McNulty was a calming influence as won lots of the ballfor Tyrone. The scores just kept coming and a Rachel O’Neill point was followed by Joanne Fox goal with only seven minutes gone. A good passage of play from Reagan Fay to Donnelly resulted in a looping ball over the Donegal keepers head with ten minutes gone.

Maria Coyle for Donegal got their first goal soon afterwards and an Emer Quinn point gave the visitors faint hope. Fay and Forker added two further points with twenty minutes on the clock. Donegal did have some good passages of play and Grainne McGill took a goal to narrow the gap a little. Forker took another goal as Casey Gallagher and Fay orchestrated the Tyrone attacks from midfield. Fay ended the half with a 45 metre free as the scoreboard read Tyrone 3-6 Donegal 2-1.

Tyrone brought on 3 subs and the game started with an early wide. It was all too easy as Fox kicked the sliotar over the line and into the back of the net. Catherine Muldoon took her first goal as Donegal were camped in their own half. Fox added another goal with only five minutes of the half gone. The game was all but over as a contest despite Donegal taking another fine goal. Emma Muldoon and Catherine Muldoon traded points and as if things weren’t going Tyrones way enough then Fay scored a goal from 45 metres out as the ball looped over the Donegal Keeper. Gallagher, Donnelly, Muldoon and Fay took further scores as they ran out comfortable winners. 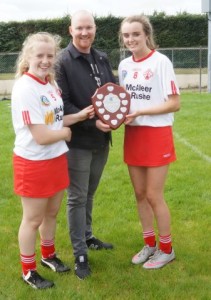